New sign installed at Woodlake Park on the corner of New Jersey Road and Waterford Drive. Other recent addition to the park is 6 pickleball courts and the pond was landscaped last year.

Woodlake Park is located at 3415 New Jersey Road. The park amenities include: tennis, children’s playground, pavilion, picnic tables, grills, green space, and pickleball courts. The park is landscaped with large oak trees, a landscaped pond, and other trees and bushes.

Treasurer’s Report was given and accepted by Pat, seconded by Allen. Secretary’s Minutes of last Directors Meeting was read and moved to accept by Brenda, seconded by Lin.

The revamping of the four circles was targeted as progressive projects to be accomplished over the next two years. Each circle has been somewhat neglected and trees, plants, posts, etc. have rotted, died or become diseased. It was discussed that a committee could be formed to make recommendations as to design and proposed costs, taking one circle at a time. Brenda moved that the architectural committee could head this project up.

The Architectural Committee is always headed up by the vice president, one additional Director and one to two non-director resident/owners.

The Beautification Award was discussed next. It was determined that the award would be bestowed quarterly with the presentation of some notice to be posted in the recipient’s yard for all to see. Nancy nominated Pat Wagner to head this up. That committee will determine the details and report back.

Treasurer. With this order established, Nancy moved to accept as slated, Brenda seconded.

New President, Allen Wright now opened the floor to discuss the annual fee and what amount the assessment should be increased. After a brief discussion, it was established that a $10 increase would be both fair (approx. 83 cents a month) and needed to cover increasing recurring expenses as well as to provide at least a modest budget for neighborhood upkeep. Brenda moved to increase the annual fee by $10.00 and Lin seconded the motion. The motion was carried unanimously by the Directors.

Meeting held on April 21, 2014 was held. After a brief business meeting, the Directors adjourned and commenced with folding, stuffing, sealing, addressing and stamping the annual assessment notices to go out to all the owners. The next Directors meeting date to be announced.

Woodlake Pond is in Woodlake Park at the intersection of New Jersey Road and Waterford Drive. It is a stormwater pond managed by the Lakes and Stormwater Department of the City of Lakeland.

How was it landscaped?

It was landscaped with a variety of native plants that will help absorb excess nutrients from the water, keeping it a healthy and more natural environment. The plants will need about a year to become fully established. Some plants will be in bloom at different parts of the year. Certain native plants were selected to make the landscaping more beautiful.

What kinds of plants were selected?

You may have noticed that the City of Lakeland cleaned out the pond on the corner of New Jersey Road and Waterford Drive a few months ago. Then, grass was allowed to re-establish on the embankment. Finally, it was landscaped with a variety of native plants.

Why did the pond need work?

The environment in the pond had become a mono-culture: only one type of plant had taken over, preventing other plants from becoming established. The pond needed intervention to return to a diversified environment. The offending plant, Spatterdock (cow lily), was removed mechanically.

How can I help keep my neighborhood lakes and ponds landscaped and clean? 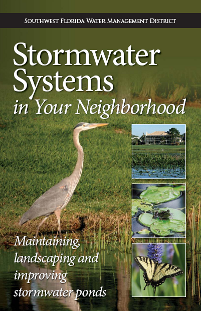 This brochure will tell you more about how to  landscape around ponds and lakes in your neighborhood. It suggests water plants that are easier to maintain and native. It also gives tips on preventing water pollution that can affect your neighborhood.

Ever wondered what native Florida plants you could put in your yard? Or what invasive species to avoid? Or how you can save money with drought friendly plants?

A great place to get info is from the local IFAS extension and other agencies that promote native Florida landscaping. Below is some information and websites to help you.

What is Florida Friendly Landscaping?

“Florida-Friendly Landscaping™ ( FFL ) means using low-maintenance plants and environmentally sustainable practices. Learn how you can have a beautiful landscape that could save you time, energy and money while protecting our future.” More info at: http://fyn.ifas.ufl.edu/

The UF/IFAS Polk County Extension Service is a partnership between the University of Florida Institute of Food and Agricultural Sciences (UF/IFAS), and the Polk County Board of County Commissioners.
Through Extension, Polk County citizens find answers to both every day and difficult issues in a diversity of topic areas, from lowering doctor visit frequency through better nutrition and physical activity, to planting a low water-use Florida yard, to protecting commercial fruit operations from pests and diseases. Find a place for your children to stay safe and build their confidence through the 4-H program, or get a license to spray chemicals as a service for your small lawn and landscape business. More info at: http://polk.ifas.ufl.edu/

“Gardening in a Minute”

Center for Aquatic and Invasive Plants